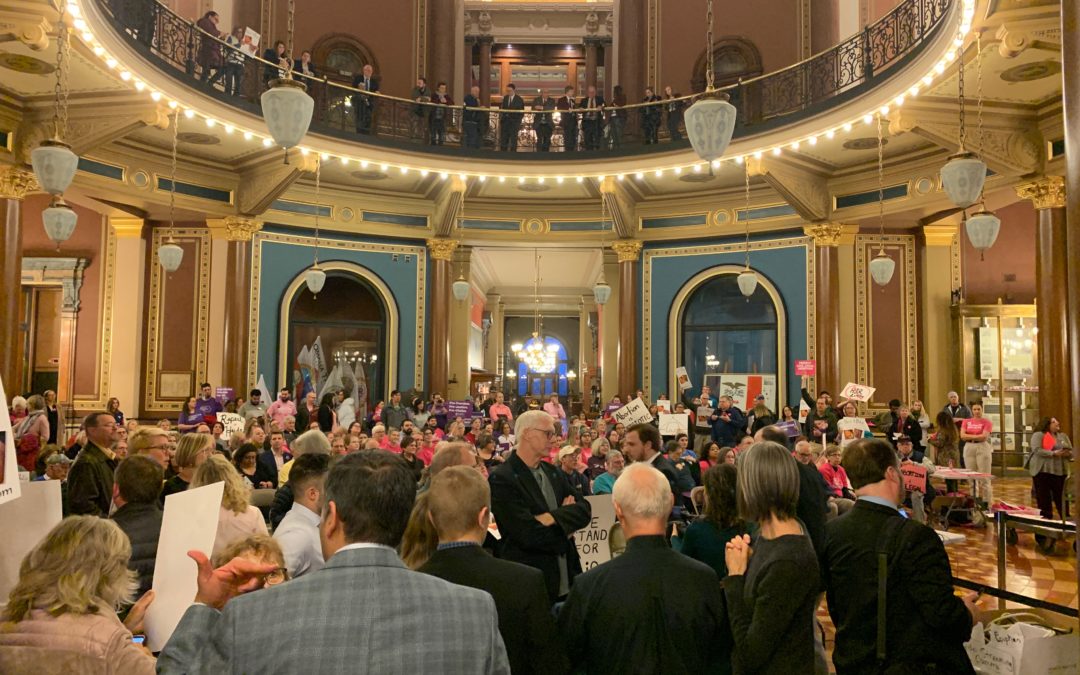 Tonight at the Iowa Statehouse there was a public hearing on the Protect Life Amendment (SJR 2001/HJR 2004). Among those who spoke, was Caitlyn Dixson, Iowa Right to Life Executive Director. Her remarks are shared below:

I’m Caitlyn Dixson, a Pella native and the Executive Director of Iowa Right to Life. I am proud to be with many in the pro-life movement to voice our support of the Protect Life Amendment.

I proudly join the call that we NEED an amendment to the Iowa Constitution that says Iowa does not recognize nor does it secure the right to an abortion or require the public funding of it. Let’s be clear; this is not an abortion ban. To the women listening to the comments, undecided to support or oppose the Protect Life Amendment, undecided on what is a right and what is taking the life of an innocent child, do not be scared by the pro-abortion propaganda. There is no blanket ban on abortion with this amendment. This amendment simply allows laws designed to protect to be enacted and stops the judicial branch from stomping down safety and security measures when you walk into an abortion clinic.

This amendment puts the power back in the people through their representatives. This amendment, though faced with opposition today, could and should be on the ballot at a future date, where even those that oppose it, those that are the most against it, can have the chance themselves to vote to decide its passage.

This amendment is what Iowans need. A voice, not only for themselves but for the preborn. An opportunity to amend our constitution and to put the power back in our elected legislator’s hands to create our laws.

Iowa deserves to have laws that can change and evolve to reflect the thoughts of Iowans. We have seen that the climate today is pro-life. That is evident in the bills that have made their way to the Governor’s desk where they were signed into law. It took an act of blatant judicial overreach to completely overturn the 72-hour provision within the 20-week bill, which then led directly to the overturning of the Heartbeat Bill going directly against what Iowans wanted.

There will be those that argue that this amendment will be interfering with women’s rights and is an assault to reproductive choice. Far too often, this means advancing an ideology that without the ability to access abortion, women cannot succeed. However, as a twenty-two-year-old mom that after immense pressure found herself on the table at planned parenthood and later walked out with her baby, I say proudly and I say boldly, that abortion is NOT healthcare, that women’s rights begin in the womb and that being pro-life is also being pro-science, pro-baby and pro-woman.